The Boys Next Door

40th Anniversary reissue of the first album featuring Nick Cave, before the band’s name morphed into The Birthday Party and prior to the formation of his next band, Nick Cave and the Bad Seeds. Includes the classic “Shivers,” which has recently been covered by the likes of Cat Power and Courtney Barnett, to name a few.

This will be the first time the album will be issued on vinyl in many territories including the U.S.

Side A
1. The Nightwatchman 2. Brave Exhibitions 3. Friends Of My World 4. The Voice 5. Roman Roman 6. Somebody's Watching Solomon Burke was an American preacher and singer who shaped the sound of rhythm and blues as one of the founding fathers of soul music in the 1960s. Originally released in 1976, Back To My Roots was his debut album on the legendary Chess Records label, a well-known imprint devoted to the best Blues, R&B, Funk and Soul music. After a long stint on Atlantic and MGM Records, Solomon Burke signed for Chess to work with the wonderful producer Herman Rush who wrote and produced this sensational album.
This release for Record Store Day is its first repress since the original 1976 release. Classic 1983 Live Gun Club recording from the Lyceum in London.  This is an often bootlegged recording from a tour which was considered one of their best.  A show from that same week was on a DVD called Live At The Hacienda, released by Cherry Red in 2006. The band consisted of Jeffrey Lee Pierce. Patricia Morrison, Jim Duckworth and Dee Pop.  This recording has been digitally remastered. One of the greatest solo debuts in rock history, Paul McCartney's McCartney, will receive a special 50th anniversary release in a limited-edition half-speed mastered vinyl pressing for Record Store Day.  Originally released in April 1970, one month before The Beatles’ swansong Let It Be, McCartney saw Paul getting back to basics. Writing every song and playing every instrument (with backing vocals from Linda McCartney), the eponymous album represented a creative rebirth, bursting with new ideas, experiments, playfulness and freedom. Sonically, McCartney's bare-bones home recording aesthetic imbued the album with an authentic lo-fi spirit, a much sought after sound that continues to retain a contemporary edge 50 years on. The 50th anniversary Record Store Day limited edition of McCartney was pressed from a master cut by Miles Showell at half speed using the original 1970 master tapes at Abbey Road Studios. It was made as a vinyl specific transfer in high resolution and without digital peak limiting for the best possible reproduction. The members of the band mostly just call it jazz, or "hot music," or, when they're feeling naughty, "race music" -- a term that dates back to the1920s and '30s, when major record labels released jump blues and hot jazz singles under special subsidiary imprints with names like Okeh and Sepiatone. It's music that doesn't really have a name anymore, yet everyone recognizes it and loves it. This wasn't the album that made the Squirrel Nut Zippers a household name (that honor goes to Hot, the follow-up), but it sure could have if given the chance. An instrumental with the pitch-perfect title of "Lugubrious Whing Whang," cover versions of "You're Drivin' Me Crazy" and "I've Found a New Baby," originals like "Lover's Lane," and the absolutely hair-raising "La Grippe" -- these are not just labors of love by dewy-eyed nostalgists. The SNZs have taken this music and appropriated it entirely, without a trace of irony or condescension. The result is magnificent.

First ever vinyl release for the album. In 1979, Johnny Thunders, legendary Heartbreakers and New York Dolls guitarist, teamed up with Wayne Kramer, also legendary guitarist of Detroit’s seminal MC5, to form Gang War, an alliance that lasted the best part of a year. Although Gang War released no records and at the time got little attention, in retrospect the collaboration is looked on as a ‘rock fantasy’ supergroup. These live recordings bear testimony to this unique partnership between two renowned rock guitar icons.

Gang War came about shortly after Johnny released his So Alone album, and Wayne was not long out of jail after serving two years of a sentence of four for a coke bust. Arriving in Detroit with the Heartbreakers, Johnny met his teenage idol Wayne who jammed with them at the gig. Johnny stayed on, moving his family to Michigan and pledging his future to Gang War. They toured regularly and recorded a couple of demos with a view to getting a deal, but they couldn’t get record company interest and after eight or nine months they split.

On the recordings, both contribute lead vocals and guitars on Thunders and Dolls tracks such as London Boys, Endless Party and M.I.A.; songs familiar from Kramer and MC5 such as Ramblin’ Rose and Hey Thanks, and fascinating cover versions such as These Boots Are Made For Walking. Together with the between-track repartee they also demonstrate the difference between the two – as Wayne Kramer has said: “Music is important to me and I value the honor, the opportunity, to be an important musician. Johnny, on the other hand didn't consider himself a musician. He considered himself an entertainer.”

Ramblin’ Rose, London Boys, These Boots Are Made For Walking, M.I.A., The Harder They Come, Endless Party, I’d Much Rather Be With The Boys, I’ll Go Crazy, Hey Thanks, The Courageous Cat, Just Because I’m White/Bright Lights Big City, Around And Around, The Harder They Come, Ten Commandments Of Love, Like A Rolling Stone, Endless Party, Do You Love Me? Bonus live at Max's:- London Boys, I’d Much Rather Be With The Boys, Endless Party, Just Because I’m White, Like A Rolling Stone 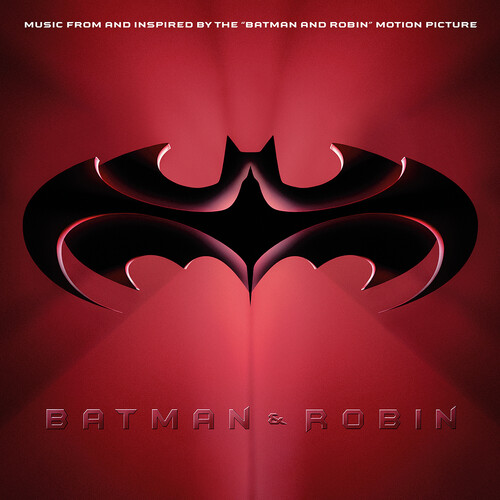 SIDE ONE 1. The Smashing Pumpkins “The End Is The Beginning Is The End” 2. Bone Thugs-N-Harmony “Look Into My Eyes” 3. R. Kelly “Gotham City” 4. Arkama “House on Fire”

SIDE THREE 1. Moloko “Fun For Me” 2. Me’Shell Ndegeocello “Poison Ivy” 3. Eric Benet “True To Myself” 4. Elliot Goldnthal “A Batman Overture”

SIDE FOUR 1. Underworld “Moaner” 2. The Smashing Pumpkins ‘The Beginning Is The End Is The Beginning” This Are Two Tone was the first Two Tone Records compilation, and features singles by The Specials, Madness, The Selecter, The Beat, The Bodysnatchers, Rhoda Daker and The Swinging Cats. This half-speed master LP is part of the Two Tone Records 40th Anniversary celebrations and is the first vinyl repress of the compilation since its original release in 1983. For the 30th anniversary of one of the most symbolic concerts of all time, this truly unique release features the 1990 Berlin performance of The Wall, Roger Waters’ landmark, concept album. Recorded in former no-man’s land between the Brandenburg Gate and Potsdamer Platz just months after the fall of the Berlin Wall, the live spectacular was watched by more than 500,000 fans. Features a string of special guest talent: Van Morrison, The Band, Cyndi Lauper and more. Limited edition double LP cut at Abbey Road. Pressed on 180g clear colored vinyl. Mike Watt, legendary bassist behind Minutemen, fIREHOSE, Dos, and so much more, is the latest to release a cover of a Squeeze song for Record Store Day. Mike teams up with his Secondmen for a cover of 'In Quintessence,' the opening track from Squeeze's 1981 album East Side Story. This is the fifth installment from the Swindles series and was produced and engineered by Squeeze-aficionado Steve Mandel. This is the first time Mike's version of "In Quintessence" has ever been released and will be available as a 45 single, with the vocal version on the A-side and the instrumental version on the B-side, for Record Store Day 2020. Hank Williams’ complete 1951 March Of Dimes performance on 10” red vinyl. Its first release on vinyl, with a new restoration and mastering of the 16” radio transcription disc. Features five songs, including “Lovesick Blues” and his then-current hit, “Moanin’ The Blues.” The disc also includes a solo track by Audrey Williams and a dual narrative on a Luke The Drifter track, plus a rare PSA read by Hank about Infantile Paralysis.

Produced by Cheryl Pawelski with restoration and mastering by Michael Graves. Together, they earned a 2015 Best Historical Album Grammy award for their work on Hank Williams The Garden Spot Programs, 1950.
Side A
1) Lovesick Blues 1:37, 2) Moanin’ The Blues 3:21, 3) There’s A Bluebird On Your Windowsill
Side B
1) Hank Talks About Infantile Paralysis, 2) Help Me Understand 3:06